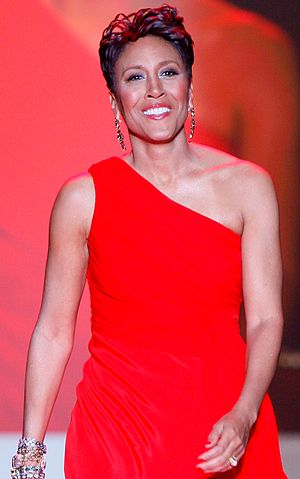 Last week’s post about role models, and the ways they help us have the courage to stand out, reminded me of an airline magazine article about Good Morning America’s Robin Roberts.

I don’t watch TV (I know, I know, lame—but you got a hint of that when I admitted I had only just recently seen Lady Gaga sing for the first time). So it’s no surprise that I didn’t know much about one of the most popular news broadcasters in the U.S. until I read the article. It didn’t take long to appreciate her extraordinary career trajectory. Add in surviving two life-threatening illnesses with optimism and grace, and, yeah, I’m impressed.

But do you know what was actually most striking to me from the write-up? Two examples of how she let her guard down on the air, and the career boosts that resulted each time.

What happens when you drop your guard and thousands (or millions) see it: https://thegetrealproject.com/?p=4670 #getreal

The first example: when she was a club sports reporter, moments from going live, and realized her tape of sports highlights was a long way from the studio. She sprinted back to retrieve it just in time, only to discover, on the air, that she was so out of breath she couldn’t speak. Her next move: laugh and ‘fess up to viewers about exactly what had just happened. The result: a flood of calls to the station celebrating her candor.

The second example: when years later, as a well-known newsperson, she was reporting live on the Hurricane Katrina disaster (which by the way had devastated her own home town in Mississippi). When asked if her missing family members had been found, she broke down in tears, on the air. Her assumption: She’d just committed “career suicide.” The actual result: A surge in audience support.

Both of these are great examples of the paradox inherent in risk-taking and vulnerability. Most of us loathe revealing anything about ourselves that might make us appear weak. We (who work mostly in the confines of meeting rooms) regularly succumb to the invisible driving force to “be buttoned up” and “have it all together”—or at least appear that way.

Now, imagine what it’s like to have millions of people see your humanity.

Then imagine what’s possible when that happens.

This week, look for opportunities to drop your guard and reveal the real you. It could be as simple as giving an honest answer when someone asks, “How are you?” Notice what it’s like to take the risk.

Learn more about what thought leader and psychologist Brene Brown has to say about the power of vulnerability, or discover three ways people go wrong when it comes to assessing personal risk-taking in Chapter 9 of The Trusted Advisor Fieldbook.