What a pop star can teach us about presence 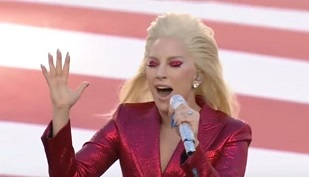 I’m not much of a sports enthusiast.

When a friend asked me about my plans for Super Bowl 50, I half-jokingly replied, “That’s a sporting event, right?”

I’m also woefully out of touch with pop culture. Which is why said Super Bowl was the first time I ever heard Lady Gaga sing.

Yes, that’s embarrassing to admit. And yes, I’m writing a weekly tip about Lady Gaga. Bear with me.

I actually didn’t catch Lady Gaga’s live rendition of The Star Spangled Banner, the U.S.’s national anthem, which historically opens the enormously popular (American) football game; I saw a post sharing the footage on Facebook the next morning. (In my pop culture defense, I am on Facebook.)

Maybe I got caught up in the moment, I dunno. The emotional tugs in the video montage—like shots of the players/coaches in solemn reverence, and the cut to U.S. troops in Afghanistan just as Lady Gaga belts out, “the flag was still there”— certainly had their effect. Whatever the contributors, I just know I was moved. And I was immediately struck by the single word that came to mind while watching Lady Gaga do her thing: presence.

I looked for clues about why she had touched me so by watching the video a few more times and doing a little Internet digging. I found a concert documentary from 2011, including one pre-concert scene where the mega-star breaks down in tears. “I still sometimes feel like a loser kid in high school,” she confesses. (I can relate to that.) On her way to reclaiming her ground, she then says, “I’m fighting for every kid that’s like me.” Soon after she bows her head in spoken prayer. Religious-anything aside, the footage suggests this international celebrity has demons like the rest of us, and works on herself to re-center.

With this brief research, I started to pull together a little Gaga-inspired presence recipe (which, by the way, looks an awful lot like a recipe for trust-building):

This week, keep a daily journal of your observations of others who have “presence,” what they do to convey that, and how you might adopt some of their habits.

Read more about the power of vulnerability in business or discover five ways to get to know your own strengths better in Chapter 10 of The Trusted Advisor Fieldbook.