Don’t make this mistake when you deliver bad news 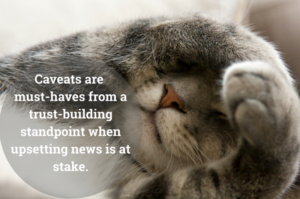 I recently got to be on the receiving end of a poorly-delivered message, and in this case the likely impact for the bearer of the bad news is no future business with me. Read on to find out what he could have done (and what you can do) to be sure bad news doesn’t cost so dearly.

Here’s the back story—a very personal one—followed by a specific tip to turn this kind of unhappy ending into a happier one.

I was visiting a new-to-me eye doctor for what I thought was a benign annual exam. The biggest anticipated drama was my first prescription for reading glasses (I know, woe is me). The doctor was friendly, talkative, upbeat, informative. He performed the routine tests, all while chatting away, and then—BAM—laid it on me with no warning:

“I’m going to send you to Dr. So-and-So. You’ll need glaucoma surgery in the next two months.”

He went on to explain at length what led him to this conclusion and what the risks would be of not attending to my issue, using fancy animated drawings on his computer and scary words like “excruciating pain” and “blindness.” I took notes. I nodded. At some point he told me it would be “the easiest surgery I’ll ever have.” I took more notes. What I didn’t do was actually hear most of what he said—including the positive stuff—because I was so caught up in an amygdala hijack, my brain spinning like a rat on crack as my co-author Charlie Green is known to say. The doctor lost me the moment he said, “glaucoma surgery.”

At the time of this writing, 24 hours have passed. I’ve since taken a few deep breaths, done some research, and scheduled an appointment for a second opinion. (FYI, if the diagnosis is accurate, I don’t actually have glaucoma, I’m just at risk for it because of certain physical conditions. It also looks to be a pretty simple and quick procedure with little to no recovery time.)

The problem is there’s big fallout for this professional because of how he chose to deliver a difficult message. I’m questioning his diagnosis and his referral—in fact, I spent a lot of my afternoon yesterday searching for someone other than Dr. So-and-So to visit next. When I reflect back on our conversation, I’m left with a bad feeling about the entire office visit, even though our interaction was a brief part of the whole. There’s a good chance I’ll never visit his practice again, and an even better chance I’ll never make the effort to tell him why.

The good news for anyone with bad news to deliver is that the antidote is simple. The doctor’s biggest failure in this case was not giving me any warning that something totally unexpected and unfavorable was coming. The shock alone triggered a physical reaction that lasted about 20 minutes (the average time for the human brain to recover from an amygdala hijack), which means I was still reeling when I pulled into my driveway at home. The antidote is a caveat, which is a short, emotionally honest statement that sets up the difficult truth to come. Something like, “I’ve got unexpected news that’s likely going to be jarring, though it does have a happy ending” would have gone a long way towards supporting my mental state, and our budding relationship.

When we teach the power of caveats in our programs, it’s inevitable that someone will ask why they’re necessary—isn’t it better to be direct? I submit to you this vivid illustration of why caveats are must-haves from a trust-building standpoint when upsetting news is at stake. And even when the news is more benign, caveats have many benefits, including giving people the courtesy of a heads up. (That could even be your caveat: “Heads up.”)

These kinds of personal experiences are always great reminders of what it’s like to be in our clients’ shoes. May this particular cautionary tale be a lesson for us all.

This week, notice what it’s like to be on the receiving end of trust-building and trust-degrading behaviors.

Speaking of bad news, learn how not to write a rejection letter, or brush up on how to talk price in Chapter 15 of The Trusted Advisor Fieldbook.