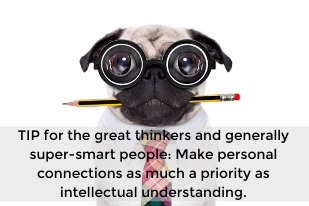 I work with so many great thinkers and generally super-smart people who routinely fail to be as influential as they could be simply because they lean too heavily on false assumptions about how rational we human beings are. Today’s tip aims to shed some light on a more effective approach.

Sigh. So what’s an earnest analyst/engineer/scientist/overall smart person to do?

Why buying is anything but rational (and what to do about it). #getreal

As my art teacher always reminds me when something goes awry with my planned masterpiece, “Embrace it.”

In other words, pay three times as much attention to the more emotional/psychological factors of the trust equation (intimacy and self-orientation). Make personal connections as much a priority as intellectual understanding. Listen masterfully so you understand what it is that your buyers really want. Sell by doing more than you sell by telling, so they get a feel for what it’s like to work with you.

In other words, keep working on your mastery with the “soft stuff.”

This week, give yourself props for every time you give the “soft stuff” its due. Or go a step further and reward yourself for it in some way. We all need a little encouragement from time to time.

Check out Charlie Green’s upcoming no-strings-attached webinar on “How to Sell to an Irrational Buyer,” or refresh on ways to “ditch the pitch” in Chapter 13 of The Trusted Advisor Fieldbook.