How saying “no” can transform a relationship 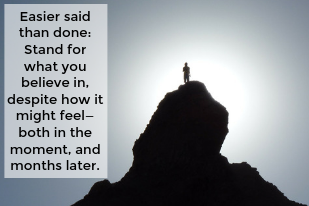 A few weeks ago, I re-told Jane’s story from The Fieldbook about the power of discovering a blind spot. This week I’m featuring a story about Wayne and me, with a lesson about how saying “no” can transform a relationship.

Some years ago, Wayne and I were dining at a popular Washington, DC lunch spot. He was then the Managing Partner of a very successful boutique firm. My colleague and I had just kicked off a pretty significant project involving the top 17 people in Wayne’s company. We were excited, and things seemed to be off to a great start.

Then halfway through the meal we discovered a really big disconnect in expectations. My colleague and I were in the process of collecting 360-degree feedback on all of Wayne’s leaders. During lunch, we learned that Wayne expected to have access to each person’s detailed feedback report. He was counting on the data to help make some critical staffing decisions. Unfortunately, this is taboo in the world of 360-degree feedback where confidentiality is paramount—something we thought we had communicated clearly, but apparently hadn’t.

How saying “no” can transform a #relationship #getreal

Wayne was understandably angry when I said we couldn’t deliver what he was expecting. I told him as respectfully as I could that we would regretfully abort the project—which was well underway and had been paid for in advance—rather than compromise confidentiality. He reluctantly agreed to continue on those terms, and we finished things out a few months later.

My assessment of the project as a whole: moderately successful.

My assessment of the relationship at the project’s end: pretty big failure.

Six months later, I got an unexpected call; it was Wayne, inviting me to lunch. My first thought was, “Uh oh.” He said there was no particular agenda; he just wanted to reconnect. Hmmmmm.

I approached the meeting with no shortage of trepidation. Soon after sitting down, I took a deep breath and asked him how things had been going in the organization. He replied that all was well and then said something that almost made me drop my fork: “You know, Andrea, I’ll never forget how you stood your ground that day when I told you I needed to see all the 360 data. I didn’t like hearing what you had to say. You were right not to give in. And I knew right then and there you were someone I could count on.”

That was more than a decade ago and we are still in touch. In fact, in an interesting turn of events, I now consider Wayne to be one of my own trusted advisors.

My key takeaways from this experience: Stand for what you believe in, despite how it might feel—both in the moment, and months later.

And definitely don’t rely on your own assessment to judge the quality of your relationship with someone.

This week, reflect on opportunities you’ve had in the past to say “no” to a client’s request … and either did or didn’t. What do you learn?

Listen to this mini-podcast on how to handle an angry client, from our friends at Trusted Advisor Associates, or find Wayne’s story in Chapter 9 of The Trusted Advisor Fieldbook.