How to be tough, tell the truth, and still build trust 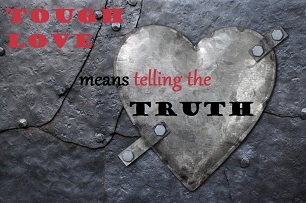 “Tough love” is a phrase that comes to mind when I think about trusted advisorship. There’s the love part: traits like compassion, sensitivity, understanding, curiosity, empathy. And there’s bringing a certain toughness, too: a willingness to ask a really provocative question, put a stake in the ground, or put hard truths on the table. Today’s tip focuses on how to do the latter in a way that actually builds trust, rather than breaks it.

Ten years ago, Charlie Green taught me a gem of a technique called Name It and Claim It. “Name It” means speaking those hard truths out loud, which then makes it OK for everyone to talk about them—that’s the “Claim It” part.
Name It and Claim It has four steps:

How to be tough, tell the truth, and still build #trust: https://thegetrealproject.com/?p=4676 #getreal

Red alert: This technique seems simple to the point of being simplistic. Don’t be fooled. In some ways, Name It and Claim It really works because it is direct and simple. It’s also a remarkably powerful tool, when it’s used with authenticity and courage. That’s because it works multiple trust dimensions at once, and quickly:

If trust-building were a Swiss Army knife, Name It and Claim It would be one of its essential tools.

Don’t leave home without it.

This week, use the Name It and Claim It technique to have the conversations you’ve been avoiding. Convert the time and energy you’ve been using to worry about the issues (or pretend they don’t need to be addressed) into crafting your caveats—they make all the difference. What opens up for you and your relationships as a result?