As The Get Real Project’s Improv Guru (a title that was bestowed upon me), I help bring the principles of improv comedy to life in a practical and inspiring way for our clients.

I show people how being honest, truthful, vulnerable and authentic is not only necessary for successful improv comedy, but can understandably transform organizational cultures

His career as both improv teacher and performer is storied: for 11 years, Shawn was the exclusive teacher of improvisational comedy at the DC Improv; in fact, he inaugurated the first improv comedy class there 12 years ago, helping grow and build the curriculum into the DC Improv Comedy School, which now boasts a roster of teachers and hundreds of students. His classes (and the numerous performances they’ve generated) have been featured in the pages of The Washington Post, The Washington Post Express, Washingtonian magazine, as well on NPR and Washington Post Radio. Of course, he’s been performing improv for nearly two decades, and currently performs in a two-person improv show, ShawnMikael(s), that’s played to audiences all over the Eastern seaboard, racking up a number of accolades during its short time in existence: the show it mounted as part of the 2011 Capital Fringe Festival found the duo being named “Best of the Fest” by DC TheaterScene; in addition, the duo have twice entered the Harrisburg Comedy Improv Throwdown, taking home the winning trophy two years in a row against stiff competition from troupes from Pittsburgh, Philadelphia, and New York City. Currently, the troupe performs a monthly show in the Columbia Heights sections of Washington, DC that’s sold out for nearly the last three years straight.

But at the same time he was also forging a career as one of the most respected improvisers in the country, he was simultaneously forging another successful career as an advertising creative and strategist. As a leader in the marketing department of the Washington Speakers Bureau, Shawn was responsible for crafting speech topics and messaging for some of the world’s most revered and respected voices and visionaries in the fields of government, leadership, business, sports, and media. As a senior creative and strategist for Proof Integrated Communications, the in-house creative division of Burson-Marsteller, Shawn took advertising ideas from concept to finished product, shaping strategy and creative into print ads and radio spots to video and digital/social media campaigns for such Fortune 500 brands as Accenture, Intel, Microsoft, Chevron, Coca-Cola, Comcast, HTC, and Raytheon (among numerous others), as well as for non-profit, governmental and non-governmental organizations.

My Get Real Services

I specialize in leading workshops, with a focus on our signature offering, Improv-ing Relationships. From time to time I’ll also join the Get Real team for one of our other signature programs to offer an unforgettable experience of improv as it relates to trusted advisorship, trust-based selling, and trust-based consulting.

Find out more about this >

What Clients are Saying

“Our consultants are still raving about the improv comedy workshops Shawn led— many, many months later. Amidst all the laughter, our consultants really learned how to think on their feet, which is a critical skill in our business.”

Director of Training and Development

My Get Real Story

In the early ‘90s, my plan to storm the halls of big-time Washington journalism was right on track: having won two highly competitive internships at print publications where other well-known journalists had made their bones, I was interviewing at various outlets, looking to take what I thought would be the next step in what I hoped would lead to journalistic prosperity.

Never mind that I had found the brief experience I had at my college paper drudgery, and never mind that my internships found me more bored than excited. And never mind that the reading and writing that I’d consistently sought out weren’t news stories, but humorous narratives that had more to with everyday observations rather than niggling facts. Still, that didn’t stop me from interviewing relentlessly to find the right door that would open to my glamorous, high-profile journalism career.

One afternoon during this time found me sitting in the office of journalist-editor, one of those weathered, cynical, old-school, shoe-leather, work-the-phones-and-hallways-to-get-the-story types of journalist who, these days, are swiftly disappearing from the landscape. Gray-haired, paunchy and gruff, he was poring over my resume and clips following the obligatory “getting-to-know-you” Q&A period, nodding and occasionally smirking here and there as he read them. When he was finished, he put them down and looked at me over his reading classes.

“Everything looks good here,” he said, pointing to the pieces of paper he’d just put down. “And you seem like a reasonably intelligent person with the energy and capability to do the job. But, if you don’t mind, I’d like to ask you one more question.”

“What do you think’s the most useful trait of a journalist?”

At that moment, it occurred to me that I was dealing with a professional, a highly trained skeptic, someone whose antennae were attuned to lies and bullshit, and to rooting out the truth wherever he’d found it. The question caught me off guard – no doubt his intention. Honestly, I’d never really thought about it before.

But admitting that wasn’t going to get me the job, I thought, so the next few minutes found me sputtering aimlessly for an answer, settling, finally, along some platitudinous verbiage, something along the lines of “being a good writer” and “getting the facts straight.” He listened, expressionless. And when I’d finally finished, he narrowed his eyes and looked at me: “Maybe you’re right,” he said, “but I think it’s persistence.”

I wasn’t right. He clearly was.

And he continued: “I’m going to do you a favor, Mr. Westfall, spare you what I think is probably a disastrous career choice on your part. You’re a good writer, indeed, an excellent writer in some places here, and you certainly do get the facts straight. But I don’t think you’re cut out to be a journalist. Your clips are fine, workmanlike. But I don’t detect a desire to really get at the real story in any of what you’ve presented me. I can see you’re competent. But: you’re not hungry. And there’s a big difference. I’m not trying to be needlessly cruel, and I do think you’re a talented writer. But not journalistic, not as a reporter. My advice is to go do, or write, something else. I know what I’m saying might sting a little, but I think, someday, you’ll thank me.”

He was right, obviously, again.

What I thought I was doing my best to “hide” in order to get ahead was readily apparent to anyone with experience. Now, as a professional improviser, I get paid to ignore the facts and the details, and get on with the funny story.

Getting a Little More Personal

Words people often use to describe me

I’m a “bright, high energy guy…” according to The Washington Post.

Everyday, unlikely acts of heroism, no matter how small, from the most unlikely people.

What brings me joy

Seeing The Hold Steady perform live; the creative chemistry I have with my improv partner, Mikael Johnson; a really good Pinot Noir.

What drives me nuts

“The rewards for being sane may not be very many, but knowing what’s funny is one of them”—Kingsley Amis

What I can’t do without

To be a literary journalist/book reviewer/film critic in the tradition of Pauline Kael. 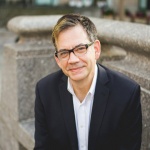