In Part 1 of Four Essential Factors for Building Trust  with Sophisticated Buyers, I suggested that even though trust-based selling is far from formulaic, it helps to approach it with a formula in your back pocket: the trust equation.

So far we’ve covered two of the four variables of the trust equation: “S” (self-orientation) and “I” (intimacy). My advice in a nutshell: “Get off your ‘S’” and “Go soft.”

Tell the truth, especially when it makes you look bad 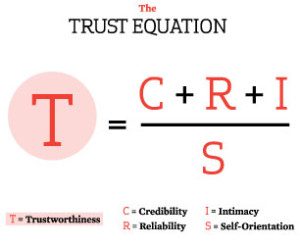 People don’t want to buy from people who know everything; people want to buy from people who know enough to meet their needs and who have a track record of dealing with others directly and honestly. In other words, they need to be confident in both the message and the messenger. That’s because credibility, as the trust equation defines it, is as much about truthfulness as it is about knowledge and experience.

Building others’ confidence in you as the messenger is harder than it sounds in a profession where the very dictionary definition of “sell” references synonyms like “betray” and “cheat.” As a salesperson, you’re doomed to some extent before you even walk in the proverbial door because the prevailing mindsets about the profession.

It is for this very reason that there is a silver lining: truth-telling in sales becomes a critical differentiator, especially when that truth is personally risky. Saying “I don’t know” when you don’t, and when you’re a tinge (or a lot) embarrassed about that, is paradoxically one of the best ways to increase your credibility. Admitting you screwed something up when you did is another one—times 10 if you’re afraid it might cost you the sale. The key, of course, is to be genuine about it all.

Do you have a client relationship where things have stalled in spite of your certainty that the message is clear and compelling? The problem might be the messenger. Ask yourself just how honest you’ve been willing to be.

There’s a telling activity that I run in my training programs. It goes like this:

Close your eyes and bring to mind your own trusted advisor—someone you can talk to about a wide range of issues, professional as well as personal, including those sensitive in nature. Then jot down the first words that come to mind to describe that person.

When I chart everyone’s words on the board for all to see, one trend is always true: instances of words like “dependable,” “consistent,” and “predictable” are noticeably lower than instances of words like, “caring,” “good listener,” “objective,” “has my best interests at heart,” and “willing to say what I don’t want to hear.”

This is partly due to the way the question is asked, true, since the question ties directly to the definition I use of a trusted advisor (safe haven for tough issues). That said, I’ll assert that it’s mostly due to the fact that traits like dependability, consistency, and predictability are assumed. They’re table stakes.

Reliability is essential for trustworthiness—in fact, all four variables are equally important. The best salespeople take their promises very seriously, including the littlest promises, because they know that trustworthy people can be counted on for tasks of all sizes. That said, reliability isn’t the be-all-end-all when it comes to building trust. And because it seems relatively easy to fix or address (compared to finding the courage to deliver a controversial message), it often gets undeserved attention.

Does it seem like you have a good thing going with a client, only she never puts herself at risk of having to rely on you for much? Get your reliability house in order. Then train your sites on the other three variables.

Don’t trust me; take it for a test drive

Don’t take my word for the value of the trust equation; try it out. One way to do that is to take a good, hard look at a relationship that isn’t as prosperous as you’d like it to be. Reflect on how your own scores on credibility, reliability, intimacy, and (low) self-orientation might inform your next move on the path to sales excellence.

I’ll bet you your next commission check that if you put the four variables to good use they’ll give you an edge you can count on for the duration of your career.