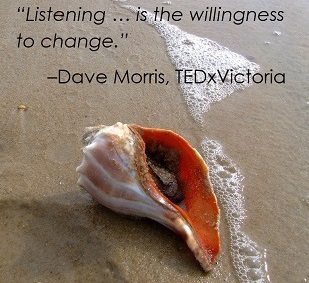 Have you ever run across a phrase that you never want to forget? I did, just a few weeks ago. I’m sharing it with you in turn since you’re likely reading this in search of ways to be more than just plain good at relationship-building; you want to be masterful. This phrase will help you do exactly that.

Brief background: My colleague Gary Jones and I were preparing our presentation at this year’s Society for Human Resource Management (SHRM) conference (our sixth year running wooohoo). We always like to make it interactive and were looking for new ways to bring a little improv into the room. Toward that end, Gary shared with me a TED Talk by Dave Morris called “The Way of Improvisation.”

At 4:35 into the talk, Dave drops a bomb. The good kind of bomb. He says something that totally rocked my world.

Dave was part-way through his seven steps to improvising. He was covering the listen step. Now, there’s nothing earth-shattering about listening as a critical part of improvising (and being influential). Dave asserted (rightly), “Most people listen just enough to be able to respond, but we don’t listen with every part of our being to what they’re saying.” Nothing big there either, although it’s an important reminder. It’s what he said next that blew me away.

He quoted Some Wise Man (that’s actually how he cited his source) who once taught him the following:

“Listening … is the willingness to change.”

Before you dismiss this as simplistic, rather than simple and profound, think about this: when was the last time you listened with change—as in, your own—as your primary goal?

I’ve shared similar sentiments in my workshops. What I’ve never done is articulated the essence of this message so eloquently, with these six simple words so brilliantly strung together.

“Listening … is the willingness to change.”

The next time you’re frustrated because you haven’t been as influential as you’d like to be with someone, ask yourself if you were willing to change based on what they said. Because anything else isn’t really listening. And without listening (yours), influence remains elusive.

Thanks, Dave. Thanks, Some Wise Man.

This week, prepare for an important conversation by changing your goal from changing them, to being willing to be changed by them. See what unfolds.

Learn more about listening at Levels 1, 2, and 3, or test yourself with some improv drills in Chapter 8 of The Trusted Advisor Fieldbook.