An alternative to the pretense of our conversations 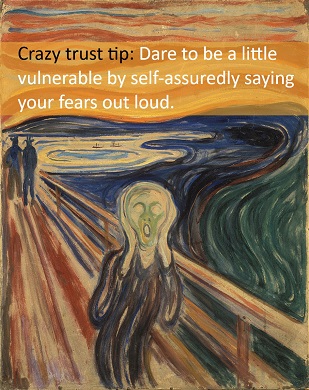 It’s been an unexpectedly challenging week, so I hope you don’t mind a reprise of a tip from November 2015—with a little extra added on. It’s funny with a poignant message about trust-building, which to me is a great combo.

The video depicts a short scene: What would happen if angry drivers were actually honest about their feelings? It begins when one driver cuts the other one off. Then instead of the dialogue we would expect to hear, the actors say what they’re really thinking, only with the intensity and volume that matches an altercation.

As you read a few of my favorite lines below, think about what the equivalent would be in your heated conversations:

(The driver who’s the victim, putting up his fists to engage in a fight, also shouting) “I really hope you don’t figure out I have no idea what I’m doing!”

(The police officer who appears on the scene, with forced calm) “All right, boys, it’s my first day and you’re a lot bigger than what you look like back there so I’m a little bit scared!”

An alternative to the pretense of our conversations: #getreal #communication

When I first discovered this skit, I asked my very creative co-author Charlie Green to write an equivalent skit that you might call Honest Client Meetings. He did a masterful job. The scene: A first meeting between a consultant and desired client. As you read my favorite lines from this one, see if you find yourself (even just a little):

(Client, reaching out for handshake): “Good morning! I’m going to act totally confident here so you can’t possibly tell that I’m nervous about this meeting!”

(Consultant, having later been asked to provide background information) “I’m relieved that you’ve asked me about my firm because, frankly, I don’t want to have to talk about myself! And, I’ve memorized those lines so I won’t sound stupid! Let me launch into our standard pitch now!”

(Consultant, nearing the end of the meeting) “It’s looking like I’m going to pull through this meeting alive! That’s good because I really just want to get back to my office where it’s quiet and I can email you, which is so much more comfortable than having to talk with you!”

I’ve been a variation of that consultant more often than I’d like to admit. You?

Consider an alternative, which is daring to be a little vulnerable by:

Life is so much simpler and easier when we find ways to be more real with one another.

This week, notice when there’s a difference between what you’re really thinking and what you’re actually saying. What small things might you do to begin to close the gap?

Refresh on the trust-building practice known as thinking out loud, or brush up on the Name It and Claim It technique in Chapter 9 of The Trusted Advisor Fieldbook.