An unexpected way to disarm your opponent 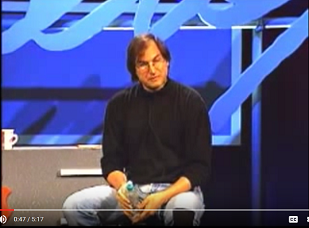 Today we flash back 20 years and learn from a video of Steve Jobs at the 1997 Apple Worldwide Developer’s Conference. Jobs offers us an invaluable and enduring lesson in how to deal with a harsh critic.

Read the play-by-play below. Or watch the video up until two minutes in to glean the lesson—in fact, you can stop as early as 1:44.

Challenge: Are you able to handle your critics with this type of couth? #getreal

Put yourself in Jobs’ shoes for a moment. There were so many other ways to reply, all of which could have been justified: ignoring, dismissing, slamming (nicely or otherwise).

Instead, Jobs shows us a great martial arts move. He takes the energy that comes at him, catches it, and carefully redirects it.

Or maybe it was a Zen Buddhist move.

This week, notice how you tend to react when someone opposes you—with hostility or otherwise. How often do you disarm them by first validating their point of view?

Speaking of Buddhist, read about how to think like a Buddhist and sell like a rock star, from our friends at Trusted Advisor Associates, or brush up on the fundamental truths of trust-building in Chapter 1 of The Trusted Advisor Fieldbook.