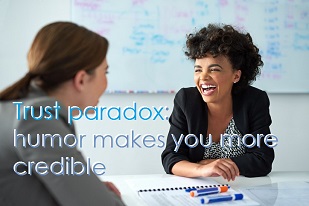 I brought a little improv comedy into a Trust-Based Business Development class I was leading last week, by way of simple warm-up games and exercises that I learned from expert Shawn Westfall. I was reminded of the power of humor to connect people, to defuse tension, and to create overall feelings of goodwill. Then I remembered a study that indicates humor also makes you more credible. That sounds like another trust paradox to me.

According to Wharton research, effectively using humor can enhance your workplace status because you’re perceived as more competent. You’re also more likely to be elected as a group leader for a subsequent task. So humor not only influences perceptions, it influences behavior.

Humor can connect people and defuse tension, but it can also build #trust. Here’s how: #getreal

Closer to home, a participant in last week’s workshop recounted the positive effect of a gently-sarcastic remark made to a new client at the beginning of a call: “You sound relaxed,” she said, when he clearly sounded anything but. The client’s reaction? First, he laughed. And then … he relaxed.

The Wharton study indicates the key to this phenomenon is confidence, because that’s what the attempted use of humor always signals.

Propriety matters, too, the researchers emphasize, since inappropriate joke-telling or class clowning works against you, status-wise.

Not a great joke teller? I say that’s OK. We’ve seen that kind sarcasm can work. Self-deprecation also has its charm. You might also try simply bringing a more lighthearted attitude to the table and see what that makes possible.

Even if you don’t get a laugh, you’ll apparently get a status boost.

This week, look for opportunities to bring humor to your interactions. If that feels too risky, then watch others who do. What do you learn?

Find out how to be a self-deprecating horn tooter, or read a funny story called The Fascinating Wife in Chapter 6 of The Trusted Advisor Fieldbook.