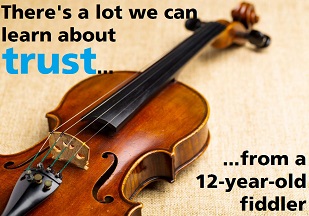 You may know I was on vacation last month. It was actually more staycation than vacation, marked by a lot of good down time that included some high-quality online binge watching. And wouldn’t you know it, one night I got to see some great trust-building lessons in action thanks to a 12-year-old fiddler from Piney Flats, Tennessee.

I was watching a U.S. TV show called Little Big Shots, hosted by comedian/actor/radio personality Steve Harvey. It’s basically a talent show that features exceptional kids—young musicians, singers, dancers, and more. Steve Harvey interviews them all before they perform, and the interviews are as good if not better than the performances. The kids are hilarious, mostly because they’re as real as they can be (as kids often are). And Harvey has a delightful and appreciative way of bantering with them that makes for some really great exchanges.

One of my favorite episodes features a young man named Carson Peters who has apparently been playing the fiddle since he was three and-a-half.

Great #trust-building lessons in action thanks to a 12-yr-old fiddler from Piney Flats, TN. https://thegetrealproject.com/?p=4676 #getreal

There are three moments during the interview that especially caught my attention:

And yeah, I’m a sucker for kids’ stuff like this, so that kinda reeled me in.

Schmaltz aside, it seems to me people in the business world—especially recovering consultants like me—could all learn something from this young musician about the power of sharing our own (real) emotions, saying “I don’t know,” and just being who we are.

This week, watch kids in action. What lessons can they teach you about trust-building? How might you be more like them?

Discover, if you haven’t already, what other three-word phrases besides “I don’t know” are an essential part of your trust toolkit, or read my story about messing up in a moment of truth in Chapter 20 of The Trusted Advisor Fieldbook.